Showing posts from March, 2019
Show all

Some Poems Worth Your Time: “Dulce et Decorum est”--Wilfred Owen 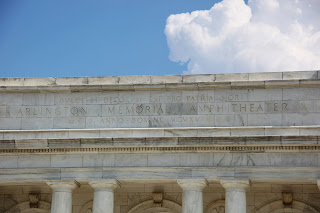 Some Poems Worth Your Time: “Dulce et Decorum est”--Wilfred Owen If you know Wilfred Owen’s poetry at all, it is probably for this poem, which confronts the idea From Arlington Cemetery, Washington DC -- "Dulce..." that war is in any way romantic with the specter of a grisly death as a result of a chlorine gas attack. Part of the power of the poem no doubt comes from our knowledge that Owen himself died as a soldier, just before the end of World War I. It’s not just that he can critique those who never fought because he was there—he actually died there, and the poem speaks to us from beyond the grave (as this poem was only published after his death). Read the poem here . The title comes from the Roman poet Horace, and it is the first part of the sentence, “Dulce et decorum est pro patria mori.” How sweet and fitting it is to die for one’s country! My experience says Owen's kind of cynicism is pretty common among soldiers. There is the thought that
Post a Comment
Read more
More posts