Showing posts from May, 2019
Show all

Some Poems Worth Your Time: Keith Douglas -- "How to Kill" 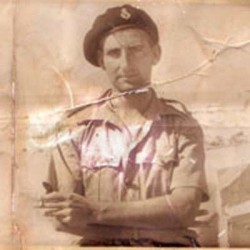 Some ﻿﻿Poems Worth Your Time: Keith Douglas -- "How to Kill"﻿﻿﻿﻿﻿﻿﻿﻿﻿﻿ Keith Douglas This is another war poem, by another British soldier, from another war. And for me, its power comes from the way the poem's speaker demystifies the act of killing as a way of repelling the reader from it. It isn't heroic. It's simple. And therein lies the horror. Here is a link to the poem. A bit about the form of the poem, because it is important to its meaning. This poem rhymes, often with loose rhyme, but it does. The stanzas are six lines each, and the rhyme scheme is a-b-c-c-b-a. Think of the rhyme scheme as a progression; it goes up, reaches the top, then goes back the way it came. An arc, perhaps. Or--a parabola. Bullets and shells travel in an arc. Because mass loses velocity over time and distance, all projectiles are launched upwards (even slightly, in the case of a rifle), because they will fall as they travel out towards their target. So do balls
Post a Comment
Read more
More posts