How to Make Sense of a Poem -- Including A Modest Example

How to Make Sense of a Poem -- Including A Modest Example

We are all readers of poetry—even the poets who wrote the poems in the first place. And we are all just doing our best to make sense of them. 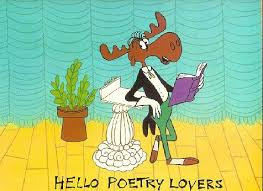 When I write a poem, it is because I see something that I want to show to others. I don’t want to explain it exactly—just show it.


And that raises the first question you might ask about a poem: Why that thing and not something else? Why write a poem about that?


And then, as you read each word, each phrase, each line, each sentence, keep asking why? Why that word? Why say it that way and not some other way?


Many people (perhaps even you) will object, saying it doesn’t matter why. What matters is what is. What the poet intended is irrelevant. I disagree—sort of. But I will save that discussion for later.


In the meantime, here is an example. A while ago, I wrote a poem called “Lloyd’s Rocket.” The poem is a meditation on an abandoned gas station and all the optimism and aspirations it might have represented, from moon landings, to the Cold War, to a cross-country road trip. So—why did I call the poem “Lloyd’s Rocket?” Why not “The Abandoned Gas Station” or any number of other names? Was it because…


Let’s talk about them in order.


1)      In fact, there actually was a gas station called “Lloyd’s Rocket.” But while that is true, it’s not really an answer. It doesn’t explain why I would call the poem “Lloyd’s Rocket.” It doesn’t even explain why I included that detail in the poem in the first place. Why does it matter? Or, to set aside what I might have meant, what is the reader to make of such a name. “Because that’s what is was called” is actually the worst answer at all—except that, were it not for the name, I might not have noticed the abandoned filling station in the first place.


2)      Now we are getting somewhere. An abandoned gas station with the name of the proprietor—a name that has been falling out of favor since the start of World War I. That’s what I thought it evoked. And (as a bonus) it wasn’t “Lloyd’s Filling Station,” but “Lloyd’s Rocket.” That seemed intriguing. He owns a rocket? Nah. Just a gas station. But it’s kind of like a rocket (if you think about it in the way the poem tries to help you to).


3)      My middle name is Lloyd. But that’s not why I included it. And I didn’t write the poem about me. But there it is. And if the reader knew that my middle name was Lloyd, the reader might reasonably assume this mattered. I didn’t think it did when I wrote the poem. But I realized later that I might have responded to the sign differently—might have paused to look—because it was my name. So here is a case where I didn’t mean it when I wrote it. But I see it when I read it. And, I think, it is why I wrote this poem, and not someone with the middle name “David,” for example.


4)      This wasn’t a consideration at all and it doesn’t belong in any understanding of the poem. Except. Lloyd Bridges was born in 1913, a year before the name “Lloyd” peaked in popularity in the United States. So his name is evidence that this name really does belong to another era. (By the way, I got the name because it belonged to my grandfather, who was born in 1917.)


5)      Again, this was not a consideration in my writing the poem. But I suppose in the early 20th century, Welsh names were popular, whether they meant “gray” or anything else, which is more support for the idea that “Lloyd” evokes another generation.


So there you have it. The title evokes another era, another generation (and its strange connection to a space-age contraption). And while Lloyd Bridges could be invoked as evidence that the name "Lloyd" is from another era, it would be unfair to say that the poem has anything to say about Lloyd Bridges.

Now, when you read an entire poem, give the same amount of attention to all the other words, and you’re set.

Some may be disappointed that I haven't said anything about meter, or sound (rhyme, assonance and such). But I think you could do worse than to ask the same question about those things: Why is this a sonnet and not some other form? Why does he call attention to this word by rhyming it with that one? And so on.

I said I would discuss intent--what the poet meant. But that is for another post. In the meantime, remember: Reading poetry is not magic. There is no secret decoder ring. It is an actual attempt to communicate (usually).

A poet-priest once said that priests and poets are much the same. Both of them hold something up to others and say, “Look! This is sacred.” I believe what he says--but you don’t have to. It’s enough that you grant that the thing in the poem is, at least, remarkable. After all, in writing a poem about it, I remarked on it, so it is, by definition—remarkable. And if the poet--and the poem--is any good, you should be able to understand why it matters, through the choices that appear throughout the poem.