On the eve of General Discharge being published, I thought I would share the story of its finding its way into print. 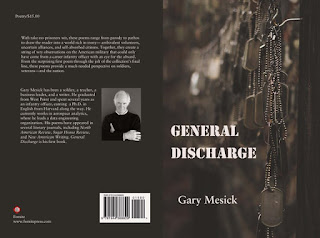 I write poetry about a number of subjects, from nature, to books and movies, to personal recollections about childhood--and the military. After 9/11, I imagined that poetry from a military point of view might be of interest, since we were once again a nation at war. To paraphrase "The Big Short," I wasn't wrong. I was just early (which, as one of the book's/movie's characters retorts, is the same thing.). Most of the military poems I wrote remained unpublished. But others (including musings on nature, books and movies, and recollections of childhood) were picked up by journals from time to time. Still, I continued to write military-themed poems (because I had to).

By 2017, I had over two dozen poems in respectable literary journals. And so I thought I would see if I had enough for a book. I tried organizing the poems around a number of themes. But then, an interesting thing happened. In 2017, my military-themed poems found an audience. A number of them were published all at once. And so I thought that their time might have finally come, and that I might build a book around them.

Why did this happen? I don't know. My guess is that it had something to do with the 2016 election. And as people realized there were large swaths of the American population they had never met, some journal editors decided to introduce their readers to these other people through my poems. I know the poems themselves hadn't changed. And one of them ("Compline, Camp Casey") had been around--and submitted to journals--for over 25 years before being published last summer.

By August of 2018, I had a book that I felt good about. So I sent it out to a few small publishers. One of them was Blackstone Books. Within a month, I heard back from Larry Moore, the publisher--and it was, as I had come to expect, a rejection letter.

But it was the kindest, the best rejection letter I have ever received. He thanked me, of course, and he said that he really liked the book. He even quoted lines of my poems to me (which I took as high praise). And then he let me down softly, saying that as much as he liked it, it didn't make his cut. But  then, in act of generosity, he suggested I contact Fomite Press, as Broadstone and Fomite share an author in common, and he thought my work might be a better fit there.

This was a rejection truly worth embracing.

And so I contacted Marc Estrin, and I sent him a sample of the book. He liked what he saw, and he asked to see the whole book. And we made a match.

I am very pleased with the whole process of working with Marc Estrin and Donna Bister at Fomite. I think Larry was right that this was where my book belonged. But it would have taken me much longer to find them (if I ever did) without the act of kindness and the sense of belonging to a community shown by Larry Moore at Broadstone. Thank you!
- February 19, 2019
Labels: Embracing Rejection (ongoing series), General Discharge