For Your Election Week Viewing...Voter Fraud, Russian Interference, and Corrupt Politicians--in a 1940 Farce: The Great McGinty 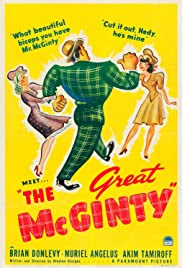 I'm a big fan of Preston Sturges. His 1940s satires seem to take on taboos of the age in a way that continues to seem fresh, even 80 years later (if you can get past black & white film--which has never been an obstacle for me, but seems to be for many).
The premise of this film--that politics is filled with voter fraud, Russian interference, and corrupt politicians--is a breath of fresh air, because in this era, we seem to think we INVENTED those things. And as this 80-year-old film reminds us, they have been with us forever. So relax. We'll survive. We have before.
In addition to the fresh look at an age-old problem, the movie offers us a glimpse into the origins of one of the all-time great bad guys of cartoon villainy: Boris Badenov. The character played by Akim Tamiroff (the aforementioned Russian interference) was the basis for William Conrad's accent and the cartoon likeness in the Rocky and Bullwinkle series. You would likely recognize it even without my telling you about it, but where's the fun in that?
After you watch this one, keep watching other Preston Sturges movies, like "Miracle at Morgan's Creek" (about a virgin birth--or not), "Sullivan's Travels" (where the film-idea-within-a-film gave the Coen brothers the inspiration for "O Brother, Where Art Thou?"), and "Hail the Conquering Hero" (about a war hero who isn't).
- October 30, 2020
Labels: Movies